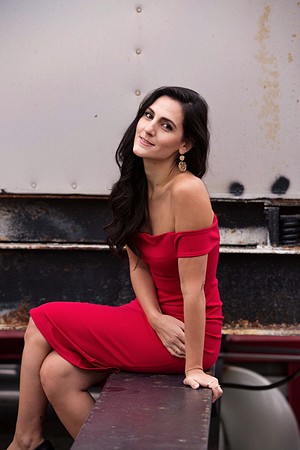 Hailed by the Maine Classical Beat for "a voice to die for (combined) with acting ability, beauty, and stage presence," Israeli mezzo-soprano Maya Lahyani is fast-becoming one of today’s most sought-after young singers.

In the 2020-21 season, Maya Lahyani will return to the Metropolitan Opera for a charming holiday production of Massenet’s Cendrillon directed by Laurent Pelly. She then makes two house debuts in the title role of Carmen by Bizet, at Arizona Opera in the winter and with The Minnesota Opera in the spring.

In the 2019-20 season, Maya Lahyani returned to The Metropolitan Opera for a seventh season to sing Rosette in Manon and Tisbe in La Cenerentola. She also returned to the Israeli Opera to sing Sister Helen Prejean in Heggie’s Dead Man Walking. In concert, she was scheduled to join the The Philadelphia Orchestra for Elektra and to make her London Symphony Orchestra debut in Tippett’s A Child of Our Time under the baton of Alan Gilbert, both concerts were cancelled due to COVID 19. Other cancelled engagements were her debuts at Chicago Opera Theater, and Theater Dortmund, and her return to Canadian Opera Company.

During the 2018-2019 season, Lahyani debuted with The Israeli Opera as Charlotte in Massenet's Werther conducted by Alan Guingal and directed by Paul Emile Fourny. She also returned to The Metropolitan Opera covering the role of Maddalena in Rigoletto, and singing Grimgerde in Die Walküre under the baton of Philippe Jordan in Robert Lepage’s breathtaking production of Wagner's Ring.

Ms. Lahyani sang over 70 performances at The Metropolitan Opera, making her debut during the 2013-2014 season in Anthony Minghella’s production of Madam Butterfly as the first Israeli born to ever sing on their stage. Other appearances at the Met including Massenet’s Werther, Cendrillon, and Manon, Rusalka under the baton of Yannick Nézet-Séguin, Elektra conducted by Esa-Pekka Salonen (all productions were seen live in HD), the role of the Palestinian Woman in John Adams' The Death of Klinghoffer, Flora in Willy Decker’s iconic production of La Traviata. As well as covering Maddalena in Michael Mayer’s production of Rigoletto, Lola in Sir David McVicar’s production of Cavalleria Rusticana, Altichiara in Francesca da Rimini, and Fiona in the Met premiere of Nico Muhly's Two Boys.

Recent career highlights including her Latin America debut as Charlotte in Werther with Ópera De Nuevo León in Monterrey, Mexico. The title role of Carmen with Opera Maine, Opera Las Vegas and Wolf Trap Opera. Her Seattle Opera appearances as Varvara in Janáček’s Katya Kabanova, Flora in Peter Konwitschny’s production of La Traviata, and Dryad in Ariadne auf Naxos. Maddalena in Rigoletto at the Berkshire Opera Festival, Hansel in Humperdinck's Hansel and Gretel With Opera Fairbanks, the Page in Atom Egoyan’s production of Salome with The Canadian Opera Company, and Third Lady in The Magic Flute with The Dallas Opera. Lahyani was also featured as the vocal soloist in numerous works by the renowned choreographer Alonzo King and his acclaimed Alonzo King LINES Ballet.

Ms. Lahyani’s concert work portfolio includes performances as the mezzo-soprano soloist in Mozart’s Requiem with the San Francisco Opera Orchestra and Chorus under the baton of Nicola Luisotti, Mahler’s Second Symphony with the Charlotte Symphony Orchestra, Bernstein's Jeremiah Symphony with the Civic Orchestra of Chicago, Ravel’s Sheherazade with the Jerusalem Symphony, Brahms’s Alto Rhapsody with the Sacramento Choral Society and Orchestra, and the alto soloist in Mendelssohn's Midsummer Night's Dream with conductor Kurt Masur and the San Francisco Symphony. Lahyani also appeared in concert of Verdi's Rigoletto with The Los Angeles Philharmonic at the Hollywood Bowl under the baton of Gustavo Dudamel.

Lahyani is an alumna of the prestigious Adler Fellowship of the San Francisco Opera, where she made her debut in 2010 as Wowkle in La Fanciulla del West under conductor Nicola Luisotti. Other roles and productions with the company include Siegrune in Die Walküre, Sister Marta and The Duenna in Cyrano de Bergerac, the world premiere of Christopher Theofanidis’s Heart of a Soldier under conductor Patrick Summers, Janáček's The Makropulos Case, Maffio Orsini in Lucrezia Borgia, and the title role of Carmen.